Many experienced brewers will have tried to push a reluctant single stage reaction to 100% completion after a failed 3/27 test by adding more methanol and catalyst into the mix. However, often the calculated amount of catalyst is insufficient, and the mix just seems to absorb it without much extra conversion taking place. Ultimately too much catalyst may be added, producing the dreaded jelly/soap mix.

Two stage processing avoids this disastrous scenario and yields excellent conversion of the source oil because it accounts for both the reversible nature of the reaction, and the water produced by the reaction. It is especially recommended for high titration oil (>5g/l). 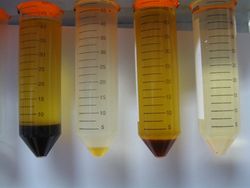 At this stage do a 3/27 test to check conversion - it should give a clear pass.

If your process involves whole batch demeth or water prewash, the stage one glycerol should be returned to the mix first. Although you may be concerned that NaOH glycerol might solidify, the methanol present should keep it liquid and it should stay warm for some time.

Otherwise, stand for a further 20 minutes, and drain off any further glycerol present, leaving just biodiesel ready to settle or filter.

The conversion process is a balanced, reversible reaction that sits somewhere between vegetable oil + methanol and biodiesel + glycerol. We push it to the biodiesel + glycerol side by using an excess of methanol, but as the methanol is consumed and more glycerol is present, it becomes harder to get that last little bit of vegetable oil to tip over to biodiesel. This is because of the glycerol present in the mix, constantly trying to push the reaction back the other way, despite the excess methanol. It's a bit like working against a spring.

By stopping mid-reaction and removing the excess glycerol, the resistance to converting the last bit of vegetable oil is removed, and the reaction completes easily.

Additionally, the biodiesel process itself produces water which consumes some of the catalyst, also impeding the conversion from completing. Removing the glycerol will take the majority of water away with it to the benefit of the second stage.