This test was originally devised by Jan Warnqvist as a simple check for biodiesel quality. 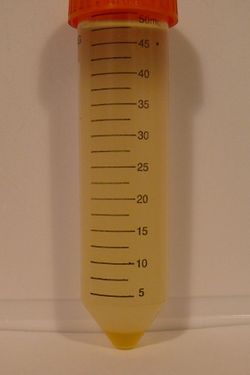 Typically a beaker of fuel is taken from the processor while the pump is still running, and settled for a few minutes so that the majority of the glycerol in the mix drops to the bottom.

A 3ml sample is then taken from the top of the beaker for testing. It is mixed with 27ml of methanol at 20°C and shaken. It is imperative that the methanol used is not reclaimed. It should be virgin and 98% pure or better otherwise a false reading will be obtained. After settling for ten minutes, if there is any drop out at the bottom, then the sample contained unconverted vegetable oil.

The test works because of the difference in solubility of vegetable oil and biodiesel in methanol:

When mixed, any remaining vegetable oil, which is denser than methanol, will drop to the bottom.

Any volumes can be used so long as the ratio is 1:9 sample to methanol. 5/45 also represents common quantities used for this test.

Trace glycerol may be present in the sample, but this won't affect the test, as it too is soluble in methanol.

Many brewers assume that by measuring the amount of vegetable oil that has dropped out, they can calculate the percentage of unconverted oil in the batch. This is, however, not strictly correct, as the sample will contain a small amount of glycerol and an unknown quantity of methanol, depending on how much has been used by the reaction.

For this reason the test is considered qualitative - whether the conversion is complete or not - and not quantitive, as the percentage remaining unconverted is only approximate, however people are getting very good results using the two stage process with no titration which determines catalyst quantity based on drop out from this test. 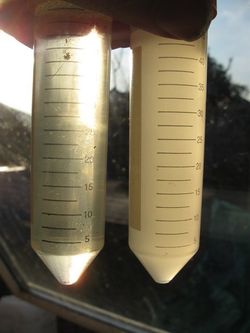 Perfectly converted fuel will give a "clear pass" where the liquid is transparent, regardless of the methanol temperature.

Cloudy liquid with no drop out at 20°C is considered a pass, but may contain mono and diglycerides. Drop out may be seen if the liquid cools.

The only caveat with using methanol cooler than 20°C is that (depending on feedstock) even completely converted biodiesel may wax and also give the appearance of drop-out as a result. For corn and rapeseed oils this is quite light in colour and distinguishable from unprocessed oil, however solidifying palm oil is quite dark and the distinction may not be so obvious.

The earliest mention of this test that can be found is an email from Jan Warnqvist dated 11 Aug 2005, on the biofuel mailing list run by Journey to Forever ... Link

Jan's email is reproduced below:


The test method that you are using seems to me highly dubious, since there are a number of pre-assumptions that has to be met. For a further check I´d suggest this:
Take exactly 25 ml of biodiesel and dissolve it in exactly 225 ml of methanol in a measuring glass.


If there is, your reaction is not complete and this is causing you trouble with the water test. This method does not cover every aspect of quality, but it gives a hint though........