From Biopowered
Jump to: navigation, search
Starting the demething stage of WBD

Whole batch demeth (also known as WBD) is a method that requires you have a venturi and condensor as per the GL Processor design or other suitably safe equipment for recovering methanol from biodiesel.

This is a method for recovering methanol from the whole batch of biodiesel complete with glycerol, as opposed to draining the glycerol phase and just demething the biodiesel.

Before starting to recover methanol from the whole batch you need to work out how much you can safely recover before the possibility of removing too much and creating soap.

The biodiesel reaction will need an average of 12.5% methanol (this varies with different types of wvo feedstock from about 11% -16%) But we take 12.5% as our average. This is referred to as the stoichiometric amount, or stoich amount for short.

BUT, we stop recovery 500ml or so short of the total excess over the stoich amount that is available just to be on the safe side.

So with 100L wvo and 22% methanol (22 litres) there is 9.5 Litres excess methanol available for recovery before problems can occur. So we only take 9 litres then bubble off any residual methanol using air once the glycerol has been drained, or just continue demething the bio on it's own in your processor. If you still don't understand there is a guide to stoichiometric amounts and how much is recoverable here
http://www.biofuel-uk.net/recoverable%20methanol.doc


Or the following chart can be used 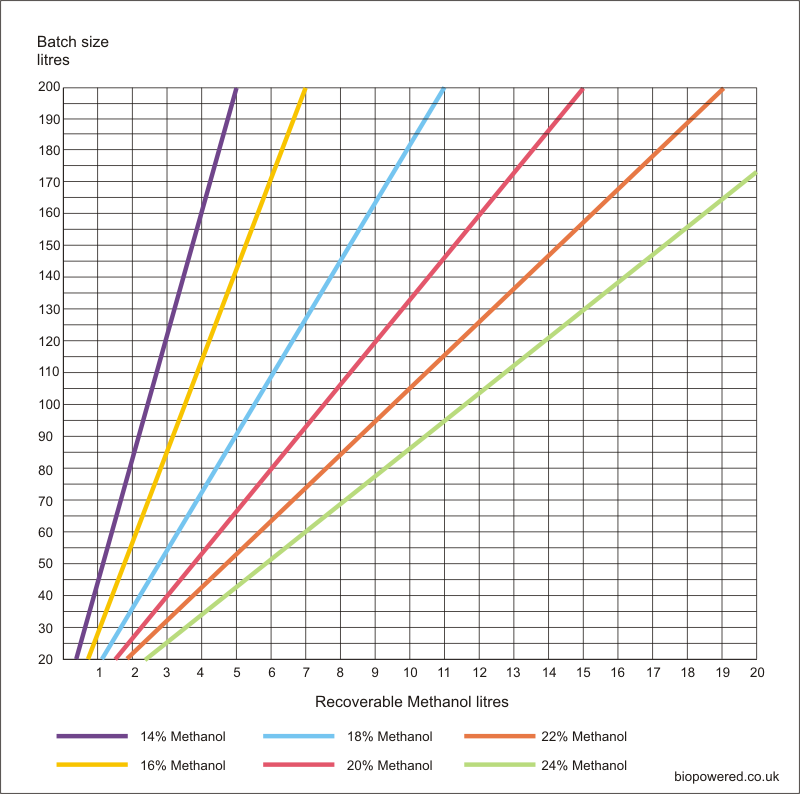 Or even easier, as it's recoverable, why not just use 25% methanol to start with then it's just under half of what you started with available to be recovered.

Do your reaction by your preferred method, until either, reaching a 3/27 pass, or until your usual end of reaction stage, BUT do not drain the glycerol, we will recover the excess methanol from the whole batch biodiesel and glycerol together.

Start demething and try to keep the vapour temp, or head space, or still head, between 65°C and 70°C (for better methanol purity) and keep recovering until you have recovered most of the excess methanol, stop and allow glyc to settle for up to an hour (be aware that NaOH based glycerol will set hard quickly and cannot be left too long) drain the glycerol and move biodiesel to your settling tank, bubble with air for a few hours or overnight in a well ventilated space, allow 12-24 hrs for soap to dropout and then filter your bio using your preferred method and use or store.

OR After draining the glycerol off continue demething just the bio and then settle and then filter your bio using your preferred method and use or store.

If you previously used a water prewash as part of your method you may find it's no longer necessary, but if you would still like to prewash then do it after demething the excess methanol, but BEFORE settling and draining off the glycerol, after prewashing settle and drain off glycerol and water, and move bio to your settling tank, bubble with air for a few hours or overnight in a well ventilated space, allow 12-24 hrs for soap to dropout and then filter your bio using your preferred method and use or store.