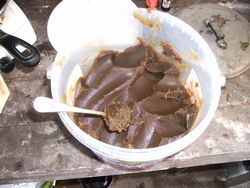 Glycerol, or glycerine, is a by-product of the biodiesel reaction. However, it is not pure; consisting of a mix of:

The amount of soaps present are related to the initial titration so the percentage that ends up in the glycerine layer is feedstock specific.

Straight from the reactor there is likely to be a maximum of 45% glycerine. After demething this is probably looking up towards 70% to 80% depending upon the amount of soap present.

If the soaps are acidulated and the resulting free fatty acids and salts removed, then this can get up above 80%. Better purity than this cannot be achieved without a large high vacuum distillation system.

The nature of the by-product depends on whether sodium methoxide or potassium methoxide was used for the reaction. Sodium methoxide produces glycerine that is solid at room temperature in the absence of methanol.

Solid glycerol can sometimes be taken to household waste recycling centres, but check with them and the local council's waste department first. It is likely you will need prior permission, otherwise you will be turned away.

Liquid glycerol can often be returned to your methanol supplier.

An economical means of disposal is to make glycerine logs to burn in a log burner. Considerable energy saving can be made this way.

Potassium based glycerol is reported as being compostable, (citation needed).