The volume of methanol required is 22% of the oil volume being reacted, i.e. to react 100 litres of oil use 22 litres of methanol. It is possible to use less methanol if your processor is particularly good at mixing, or if you're doing a two stage process.

The quantity of catalyst to use is determined by titration of the oil.

As with storage and handling of the catalysts, care must be taken when handling methanol and mixing methoxide. At a minimum this should include protective gloves and eyewear. 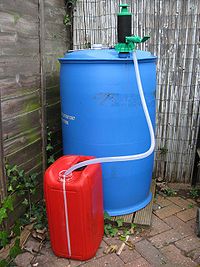 This is best done outdoors to avoid inhalation of methanol vapours.

There are several ways to achieve this:

The most important things to remember is that methanol is highly flammable and poisonous, so avoid splashing it on skin or breathing the vapour (which has a distinctly sweet smell).

To get the right volume, use a drum with graduations up the side, mark the required level on a plain drum, or sit the drum on scales (methanol's specific gravity is 0.7918 kg/l).

Measuring out the catalyst

TAREing the scales with an empty container 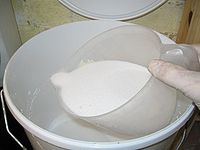 Scooping out the catalyst 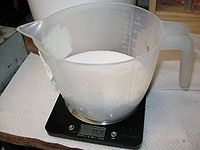 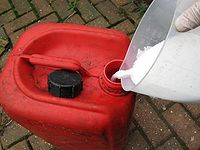 Since the catalyst is hygroscopic, limiting its exposure time to air is important. It is best to keep it, and the jug used to measure out, in a sealed plastic container.

First off use the TARE function on your scales to account for the empty weight of the measuring jug. The scales should display 0g.

Then use the jug to scoop out some catalyst, placing on the scales to check the weight and pouring out/scooping more as required.

Finally, once the correct weight is achieved, take the scoop of catalyst outside and carefully add it to the methanol. If you used a measuring jug, either squeeze the sides to guide it in, or use a funnel to direct it into the drum.

Remember to reseal your jug and catalyst in its container.

There are really only two ways to do this:

The simplest, but most effort, is just to shake it up in the drum.

You'll notice that the drum starts to pressurise and warm up, so periodically release the pressure in the drum, taking care not to breath any released vapours.

NaOH catalyst is a little harder to get into solution and takes more shaking to do so. There are a couple of ways to help this along:

The latter relies on the exothermic heat of the reaction to help dissolve in the catalyst. If less methanol is used then the temperature of the mix is greater. It is important to consider that the drum is likely made of the thermoplastic and will soften with heat, and the methanol will start to boil if it reaches 65C. For this reason it is important not to exceed a concentration of 100g of catalyst per litre of methanol.

Be aware that methoxide is a particularly nasty chemical that can cause painless nerve damage on contact with the skin and is very poisonous.

A note on water

Mixing methoxide naturally creates water as a by-product, so you will always get some soap produced from this water during the biodiesel reaction.

Both sides of the equation have mass balance and add up to 72. So for every 40g of NaOH added you will get 18 grams of water produced.

Both sides of the equation have mass balance and add up to 88. For every 56g of KOH added you will also get 18 grams of water produced.

Some additional water will also produced by the catalyst neutralisation of free fatty acids in the oil.

A note on soap

The reaction with veg oil uses the NaOMe to produce glycerol in three steps, but each step also requires a proton from another source; MeOH (or it could be water).

If the average molecular weight of the oil is say, 992, then each free fatty acid will be about 300. This means that for every 40g of NaOH used to neutralise FFA you will produce about 320g of soap.

(Notes regarding water and soap courtesy of countrypaul)