In winter (or in a convenient freezer) some waxing in biodiesel may be observed as either suspended flakes or a white/yellow creamy layer at the bottom of containers. 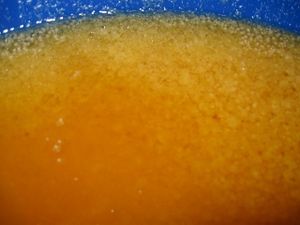 Turning vegetable oils into biodiesel lowers the overall melt point of the liquid - the produced fuel will still be liquid at temperatures where the source oil will be solid. However, making biodiesel from oils containing high melt components such as palm oil will inevitably result in higher melt points in the final fuel. These components are commonly referred to as high melt point esters (HMPEs).

An incomplete reaction, or a partial reverse reaction (such as by removing too much methanol while following the whole batch demeth method) can result in biodiesel that is rich in monoglycerides and diglycerides. These often cause cloudyness in the methanol when performing a 3/27 test.

Mono and diglycerides have an elevated melt point. During the warm days of summer they remain liquid and their presence may go undetected. In winter a layer of cream can form after a few days of settling.

Additives such as petrol typically do not prevent wax formation, though the level may be reduced. Treatment is by water washing, separation, or a combination of the two.

As mono and diglycerides are emulsifiers, they can be removed by water washing.

Cold water washing may also help remove waxes caused by HMPEs, as the cold will assist their solidification. However not all HMPEs may be washed out, as they are less dense than water.

Doing a water prewash may help with reducing the level of waxing on settling after demething.

After gravity settling for a week or so, any waxes should have settled to the bottom of the batch, and liquid biodiesel can be carefully drawn from the top. Care must be taken not to stir or disturb the batch during this process, as the cream easily can flurry up into suspension.

Waxes may be separated by gravity filtering through sheets, or by centrifuging.

Pressure filtering, for example with a pump through 10" filter elements, may only remove a small amount of wax - the rest will be extruded through the filter element by the pump's pressure and still be present in the fuel.

If you believe the waxes are from monoglycerides rather than HMPEs, then the creamy liquid at the bottom can be put into the next batch for reprocessing. Only a very small amount of methanol and catalyst will be required to complete their conversion to fatty acid methyl esters, so treat them as already converted biodiesel in the batch, or follow the two stage process without any changes.

If the waxes are from HMPEs, then reprocessing will have no effect beyond melting them (they will reform on settling again).

TODO: Possible to differentiate between HMPEs and monoglycerides by 50:50 shake test with water or cloudy 3/27? Further testing required.