This is probably one of the least complicated processor designs and is suited to those new to biodiesel production. It is similar to the Appleseed processor used extensively in the USA. It can, by quite simple modification, be upgraded with additional equipment to speed the process and could, if desired , be converted into a GL processor. Biodiesel made with this design of processor will require an additional tank for finishing and a separate methoxide mixer. 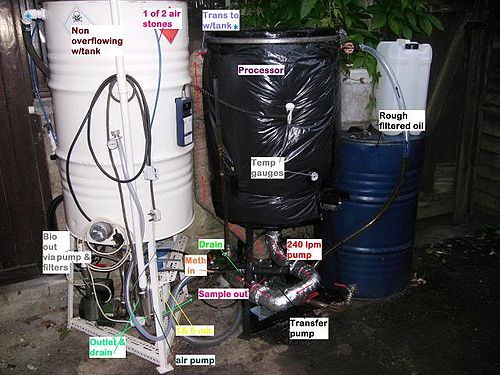 As with all processors employing an electrical heater, it is strongly recommended that the heater is interlocked with a processor level switch or that a non siphoning, in-line heater is used.

A 7% water wash can be used with this processor design, but it probably offers little benefit as the design requires additional water washing. It is preferable to retain the glycerol, uncontaminated by water, and use it to glycerol wash the subsequent batch.

To further simplify the design, the venturi could be dispensed with and the methoxide introduced via valve V1, using the suction created by the pump. The pump should be running with valves V2 and V4 fully open. Connect your methoxide container to the 'oil in' pipe and crack open vale V1. To reduce the possible risks involved with this method only a small flow of methoxide should be allowed into the stream of circulating oil. It is important to maintain this ratio of oil to methoxide to ensure no high concentrations of methoxide pass through the pump. For the little cost and effort involved, it is far preferable from a safety point of view to fit a venturi. 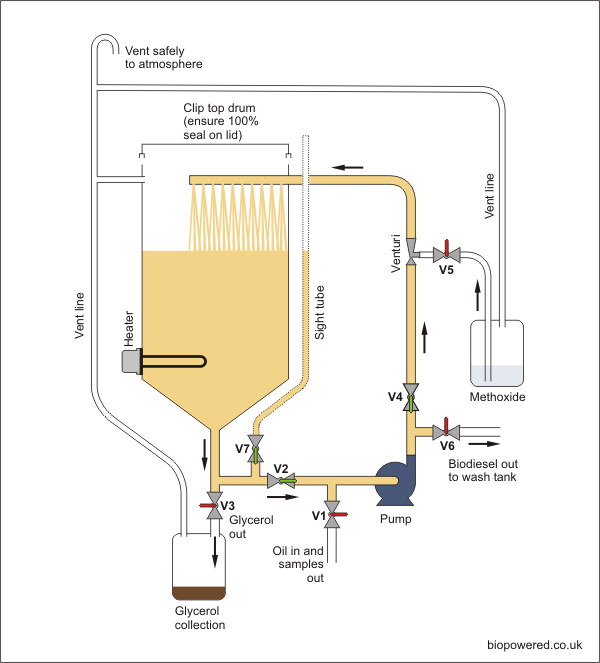 This table tells you about the status of each valve, the heater and pump at various stages of the process.

Your oil must be free of large chunks of debris, so your pump doesn't jam. There is no need to filter it (all the fine bits and pieces will end up in your glycerol layer). It must have no visible water in it.

Open valve V1 to load oil into the reactor. Shut valve V1 when the oil level in the reactor reaches approximately 70% of its capacity. This will leave the correct amount of space for the methoxide which you will add later.

Remove the processor lid and check that the heating element is completely covered by the oil.

Open valves V2 and V4, and start the pump running to re-circulate oil around the tank.

Switch on the heater if you are CERTAIN that the reactor is filled above the element and that the pump is running. It is dangerous to add heat if the level is too low, because you may expose the heating element, which would then overheat and ignite the oil in the tank. You could have a tank fire.

You must run the pump whenever the heater is on, so that there is a steady flow of oil to cool the element.

Heat to 70-90°C (you generally find what works best for you after a few batches) and leave to settle for a short period unless you intend to glycerol wash, see below. Once up to temperature you can switch everything off and after a short period, drain any water which has dropped out or carry on with the drying process.

With the heater and pump running oil will circulate around the processor via the sparge pipe where oil is sprayed through the air within the tank. This process exposes a large surface area of oil to the atmosphere allowing water to evaporate. In the video clip right, you can see steam escaping from the hot oil as it's circulated. A fan blowing air into the top of the tank will speed the process.

Continue this process until the oil passes a hot pan test.

Once dry, allow the oil to cool to the reaction temperature of 64°C. Leaving the lid off the processor will speed things up.

Replace the processor lid and ensure that it is completely sealed before proceeding.

With the heater off, valves V2 and V4 open, the pump running and your methoxide container connected to the suction of the venturi, open valve V5 to introduce the methoxide. This as quickly as your system will allow, unless you are using the pump suction, in which case please pay careful attention to the comments in the ‘basic design’ section. Close valve V5 once all the methoxide has been entrained.

Ensure that the processor lid is on and sealing correctly and that the heater is off. Run the pump with valves V2 and V4 open, for 1-1½ hrs or until a 3/27 test is passed. Tank temperature shouldn’t drop below 50°C during the reaction.

Crack open valve V3 and allow the glycerol to drain slowly. If you try and drain too quickly you run the risk of creating a vortex in the processor and not achieving a clean split between the biodiesel and the glycerol. When you notice biodiesel draining, close valve V3. Wait a further 15-20 minutes and you should be able to bleed off a little more glycerol.

Be absolutely certain that the heater is switched off and with the lid still in place, open valves V2 and V6 and run the pump. The transfer pipe work should be metal in preference to plastic as the temperature of the biodiesel will still be quite high. Once transferred the biodiesel will need to have residual methanol, soaps and traces of glycerol removed. This can be achieved in several ways, water washing or bubble washing, a combination of both or simply leaving the biodiesel to settle. 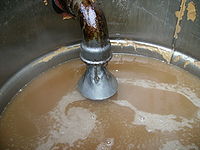 Diffuser in place of sparge pipe

Slightly more complicated than a simple sparge pipe, but a diffuser will give quicker drying of wet oil.

The basic design employs typically a TAM 105 or a Leo XKM60 based on an 80 - 100 litre batch size, but a pump with a capacity of around 100 – 150 litres/min. could be used giving a reduction in processing time

The one flaw with this design of processor is the possibility of running the heater, part of which is exposed above a low liquid level. Two methods of preventing this have been introduced, both of which interlock with the heater to prevent it being switched on when the oil in the processor is below a predetermined level.

Devised by Graham Laming, this unit comprises a small tank fitted with flow and return ports and housing a heating element. It is designed in such a way that liquid is trapped in the tank even when the system is drained. They remove the need for an in-tank heating element but are not in themselves fool proof. 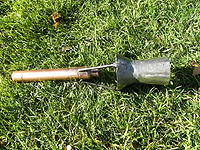 This is a devise mounted inside the processor operating on the venturi principal and driven by the existing pump. It creates a turbulent circulation within the tank and significantly reduces processing times.

Instead of using the thermostat built into immersion heaters many users are now employing PID controllers. These units control to a far greater accuracy, without hysteresis, and across a broader temperature range.