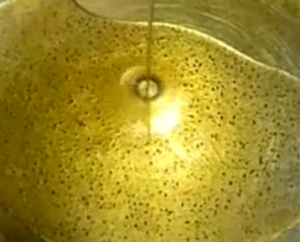 Used by home biodiesel producers, the hot pan test indicates the water content of oils. All oils and fats used for cooking food will contain water to a lesser or greater extent. The hot pan test is not a quantitative test but gives a very good indication as to the oils suitability for making biodiesel or for use as a fuel.

The HPT is a very simple test requiring no special equipment, just a stove and an old pan. Some people use a variation of the HPT, often called a crackle test, which involves using just a drop of oil in place of a shallow layer but this is considered less accurate and won’t be covered by this page.

How oil gets contaminated with water

Vegetable oil is capable of holding 200 to 600 ppm of water (0.02 to 0.06%) in suspension depending on its temperature and age. Used vegetable oil can hold 2400 ppm (0.24%) or more. Most oils used by home brewers comes from deep fat fryers. When carried out correctly, deep-frying does not make food excessively greasy, this is because the moisture in the food repels the oil. Hot oil heats the water within the food, steaming it from the inside. The oil can’t penetrate the food because of the pressure of the steam forcing its way out. Provided the oil is hot enough and the food is not fried for too long, oil will not penetrate the food much further than the outer surface.

During this process it’s obvious that water from the food is liberated into the oil and if the food is cooked for too long, a greater volume of water is lost to the oil.

The correct frying temperature depends on the type of food, but in most cases it lies between 175 and 190 °C. At these temperatures much of the water is boiled off from the surface, but not all. Storage conditions, once the restaurant has finished with the oil, can lead to even greater water contamination both from the atmosphere and by rain finding its way into open receptacles.

How the test works

The theory is quite simple. Oil is poured onto a hot surface the temperature of which is well above 100°C. Any water in the oil will make it’s self obvious by boiling off.

Heat a pan on the stove, then using a tissue or kitchen paper, wipe a smear of oil across the bottom of the pan. If the smear smokes the pan is hot enough.

To give some idea of the temperatures involved, the following gives the ‘smoke point’ of some common oils:

Once up to temperature, remove from the heat and pour in enough oil to cover the bottom of the pan to a depth of about 2 to 3mm. Closely observe the oil, one of three things is likely to happen.

As an alternative to the above method, the oil can be put in a cold saucepan and brought up to heat whilst its behaviour is observed. The drawback with this method is the difficulty in knowing when the oil is over 100°C and hence when the test is complete. If you have a suitable thermometer or temperature measuring devise it will help, but be sure that bulb or sensor doesn’t touch the bottom of the pan or it will give a false reading.

If the oil reaches a temperature where it starts to smoke, remove from the heat immediately as it will be more than hot enough and the test will be complete.

It is preferable to use an electric ring rather than a gas flame to reduce the risk of the oil igniting.