Importance of venting a processor

It is imperative that all biodiesel processors be vented safely to atmosphere via an un-valved pipe. All the processor designs shown on this wiki are vented.

A vent will not mitigate an explosion. The generation of gas in an explosion is far too rapid for the vent to cope.

The vent is designed to allow air to be displaced when filling with oil, adding methoxide or to be entrained into the processor when pumping out finished biodiesel. It will also allow the contents to safely expand and contract when heating and cooling. 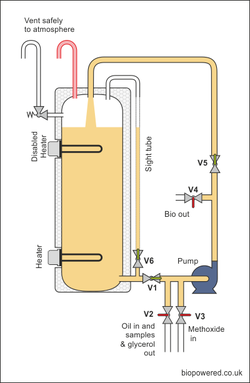 On a processor without methanol recovery i.e. no vapour circuit, the vent can be a simple small bore pipe with no valves from the ullage space of the processor, leading outside and terminating safely as far away from human contact as possible.

On the Appleseed processor, right, there is an additional vent which incorporates a relief valve which would operate in the event of the main vent becoming blocked.


Vents on a GL type processor 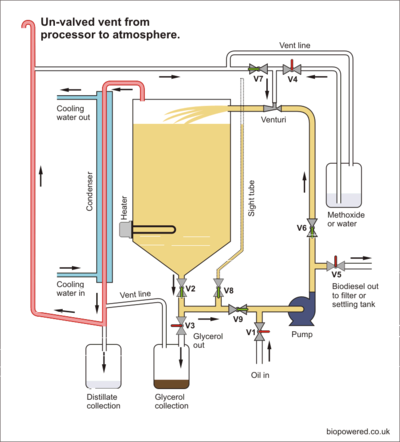 Whilst it's possible to vent a GL type processor, direct from the tank, it is more ecologically beneficial to install the vent on the vapour line, after the condenser, highlighted in red. This way any methanol fumes that are released during the reaction, or in the de-meth stage, will get condensed off and collected instead of being released to atmosphere. 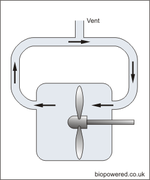 Because the vent is on the vapour circuit, one of the most commonly asked questions is why doesn't the venturi blow vapour from the vent. The answer is best described by the diagram below where the fan is located in a chamber. It blows the same volume of air out of the chamber to the left, as it sucks in from the right, so it creates a circulation. There is no vacuum or pressure in the circuit, therefore no air sucks in through, or blows out of, the vent. The theory is exactly the same in the processor, except in place of a fan you have a venturi (far safer as there are no moving parts). The only time air will come out of the vent is when you add oil or methoxide to the processor or when the oil and air expand whilst heated. Similarly when you drain glycerol or pump out the finished biodiesel, the vent will suck air back in.

On any vent arrangement, the safest material to use is rigid pipe, preferably metal. Soft flexible pipe work can kink or be flattened by things leaning against it and are also susceptible to the effects of heat, compounding other issues.

If the vent becomes blocked a build up of positive or negative pressure can occur. This will have sever effects on the most vulnerable part of the system, namely the reactor tank.

As seen in these pictures, negative pressure can cause the reactor to implode. This is due to the atmospheric pressure on the out side of the tank pushing inwards.

These photos were supplied by BassAddict, who had used flexible hose for his vent which had a small restriction in it. The negative pressure created when the biodiesel was pumped out collapsed the pipe, sealing the vent.

This is why we advocate using rigid pipe for the vents.

The most likely way to produce positive pressure in a GL is by pumping oil into it with a closed vent, although in most cases it is unlikely the pump will produce enough pressure to cause a problem.

However, if a reactor full of cold oil was heated with a closed vent this could build up a surprising amount of pressure.

It is possible the the reactor or pipework could rupture, but an explosion is highly unlikely in this scenario.

This page is a collaboration between Julian and Mark.