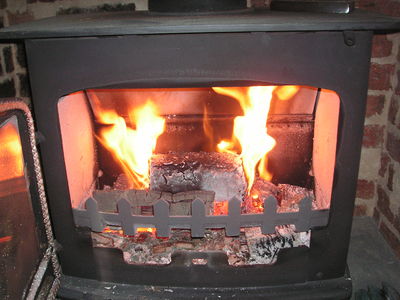 Glog made from a carpet core and hard wood shavings from a window factory after 30 minutes burning.

Glycerine logs, 'glyc logs' or 'glogs' are fuel logs made of biodiesel waste and a suitable flammable absorbent material which can be burnt on a solid fuel appliance to produce heat.

The product which biodiesel manufacturers refer to as 'glycerine' or 'glyc' is actually a mixture of glycerol, methanol, mono-, di- and tri- glycerides, catalyst from the reaction, water and other impurities. Depending on the catalyst used and the processing method, the glycerol may stay liquid for a long time or may set solid within hours of draining from the processor. Virtually all biodiesel recipes and processes will produce glycerol that can be used for logs. The only method known to affect the efficiency is a 7% water wash. The additional water content of the glycerol tends to reduce their flammability slightly. Clearly, the glycerine needs to be liquid in order to mix thoroughly with, and be absorbed by, the absorbent.

There are several absorbent materials which can be, and have been, used to make logs. Shredded paper and sawdust are probably the two most commonly used examples.

When using sawdust, finer is definitely better. The dust produced from furniture workshops and those places which cut boards to size is considerably more absorbent and will hold far more glycerine per log than chainsaw chippings or wood shavings. Whatever absorbent is used, it is important that the material is dry. If it is wet then that water will be trapped in the logs causing the same combustion problems as a water prewash.

There are plenty of options for mixing the two products ranging from a bucket and stick through to concrete mixers. Whatever method is used, it should be remembered that the 'glycerine' from biodiesel processing contains a number of potentially harmful chemicals and should not really be handled without gloves. If the glycerine has not had the methanol removed, there is the added risk of Methanol vapour being given off, therefore mixing should be carried out in a well ventilated space (ideally outside).

This is the simplest wasy to make logs. Anything of a suitable size for the intended appliance and made of a flammable material is useable. This makes old carboard containers (catfood pouch boxes, parts boxes etc). Tetra Paks cut open at one end and Pringles tubes are ideal.

One of the best options though is the large diameter cardboard tubes found inside rolls of carpet and other floor coverings. These are generally thick walled and allow the mixture to be firmly compacted inside them.

Covering one end of the tube with tape can help stop the sawdust falling out of the end while compacting it.

If a fine absorbent material (such as fine sawdust) and a previously solid sawdust is used then it is possible to compact the mixture into a mould and then remove the log which will still hold together.

The mixture needs to be compacted into the containers in order for it to stay together when burning and also to hold it's form during storage. Clearly this is vital if the intention is to mould the logs then remove them from the mould.

Ramming the mixture into the boxes with a suitable piece of wood and hand pressure is sufficient although it may well be possible to adapt a log splitter or similar machine to do this on an automated, or semi- automated process.

There have been many discussions as to the combustion gasses and products produced by them. One concern is the gas acrolein, although it should be noted that this gas is also produced when burning tree logs.

Whilst there is no doubt that acrolein is produced from heated glycerol, the gas itself is flammable and therefore, in a flaming fire, will be ignited and broken down into simpler gasses.

The greatest risk of acrolein, and other toxic and unpleasant gasses, is with a smouldering fire. As such, glycerine logs should be burned with sufficient air to maintain a fire with visible flames. It is recommended that the fire is started with wood or other flammable material to ensure that sufficient heat exists to assist with the combustion of the logs.

Smaller logs, made in the same way but with toilet roll tubes make very effective firelighters though and can be used to get a fire going well before adding larger logs.

The other consideration is that if the mixture in the log is too wet, or the absorbent is not very effective, there is a potential for unburnt glycerine to drip from the logs. Clearly this can present a hazard unless there is some way to contain this should it happen.

Whilst it is possible to burn glycerine logs on a open fire, there is clearly a heightened risk of combustion products entering the room and also of unburnt glycerine leaking from the fire grate and onto the hearth.

As such, it is highly recommended that glycerine logs are burned on an enclosed log burner or multi-fuel stove. They also work well in Aga and Rayburn type solid fuel cookers.

The two pictures in this section show the same glycerine log on a wood stove. The left hand picture shown 10 minutes are placing the log on the fire, the right hand is the same log 30 minutes are being placed on the fire.

What is left after burning

This depends to some degree on what was used to make the log and also whether the ash can was cleaned out at all. Thick cardboard tubes tend to produce more ash than thin tubes and boxes, presumably down to the materials used in their construction.

The contents of the log tend to leave small hard lumps, dependent to some degree on the soap content of the glycerol.

If the log has been too wet or the fire has been left to cool down, unburnt glycerol can also collect in the ash turning it from a dry powder into slightly sticky large clumps.

This is why it is best to keep the fire hot and to avoid too wet a mixture in the logs.

The logs do not produce much in the way of soot in the stove or on the glass but a good tip for cleaning glass from bio-rich-time-poor is to used a damp cloth dipped in white wood ash to wipe it.

Most brewers either make biodiesel all year round or in Spring to Autumn. This is somewhat unfortunate since, unless using them is a solid fuel cooker, the demand for glycerine logs is between late autumn and spring.

This leaves the options of either stockpiling the constituent materials throughout the year and making small batches of logs as needed, or making them as the glycerine is produced and storing them.

I have successfully stored glycerine logs outside for approximately three months with little degradation. The only issue observed is a tendency to absorb moisture from the air making the logs slightly harder to ignite and softening them somewhat. Making them through the warmer months has the benefit of less time spent making logs in the depths of winter.

Clearly, they should be kept in a dry area since if they are allowed to become wet, the cardboard will become waterlogged and the log will disintegrate. There have been some suggestions that wrapping the logs in a layer of 'clingfilm' plastic may be advantageous in keeping out moisture and improving structural stability of the logs. The clingfilm will burn away as soon as the log is placed into a fire.

Due to the fact that they are flammable, may contain small amounts of harmful chemicals and have a distinct odour, is it not recommended to keep quantities of logs inside the house. Far better is to keep them separate and bring in a day's supply at a time.