Biodiesel processors are machines that react vegetable oil with methanol, breaking down the oil into fatty acid ethyl esters, also known as biodiesel.

Processors can be home built or commercially bought, although caution must be exercised as a great many commercial offerings are not suitable for purpose or are downright dangerous.

As a general rule:

Excellent advise on processors can be sought on the vegetableoildiesel forums. We would strongly encourage a prospective buyer to post there asking about a potential purchase before parting with their hard earned cash.

Things to check on your quest for a good bioDiesel machine. 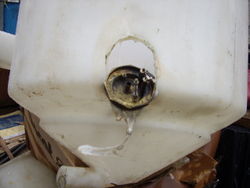 Result of over heating where an immersion heater is mounted directly in a HDPE processor.

And Finally, don't buy a machine from an internet auction site, as some of the items there are extremely hazardous and you will have no come-back if you have trouble

If you are going to buy a ready made machine, always buy it from a reputable supplier who has experience in the field, who will train you properly and give ongoing assistance.