This page describes the Mitsubishi Delica 2.8TD fuel system and problems that may occur when running on biodiesel. Note that many of these issues are problems with pump diesel too, but on a vehicle of this age biodiesel can accelerate failure in aged components.

The Delica's 4M40 engine is equipped with a licensed copy of the Bosch VE pump, built by Zexel. This is gear driven from the crankshaft. It directly sucks fuel up from the tank through the fuel filter.

Inside the fuel tank there is a coarse strainer.

Because of the tough Zexel pump and indirect injection, this vehicle is suited to running on both biodiesel and vegetable oil.

The strainer in the tank can easily block with wax or soaps if soapy biodiesel is run through the system. Because the in-tank strainer has a hole in the top, this blockage isn't usually noticed until the tank is down to 1/8th full, when the vehicle will stall.

The recommended solution is to drop the tank, remove the strainer, and fit an inline course filter in the engine bay, where it can be observed and easily accessed. 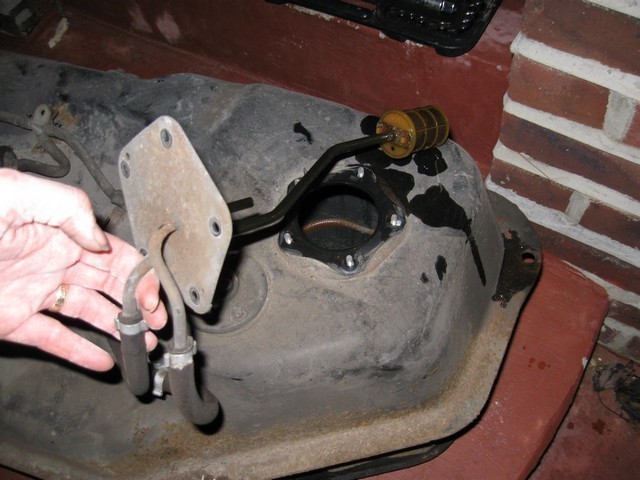 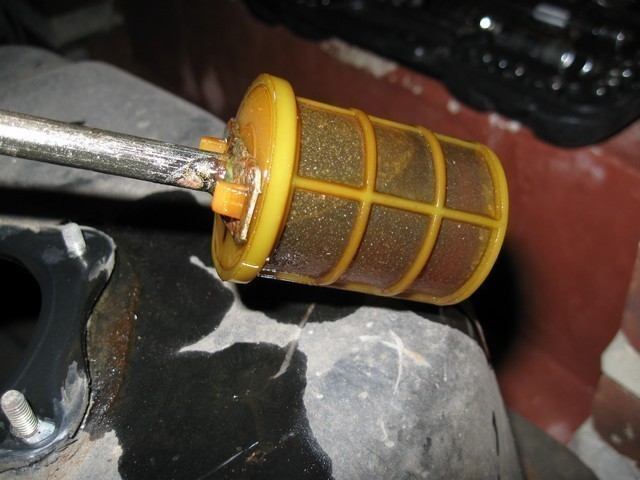 Common replacement filters for the Delica (and Pajero) are those manufactured by Boshi.

However, Delica and Pajero filter heads are slightly different in design.

In the picture below, on the left is an OEM filter, with the Boshi filter on the right. Note that the Boshi filter has an extra seal mounted on top - this won't seal properly on the Delica, and should be removed (twist off with pliers), otherwise air ingress is likely. 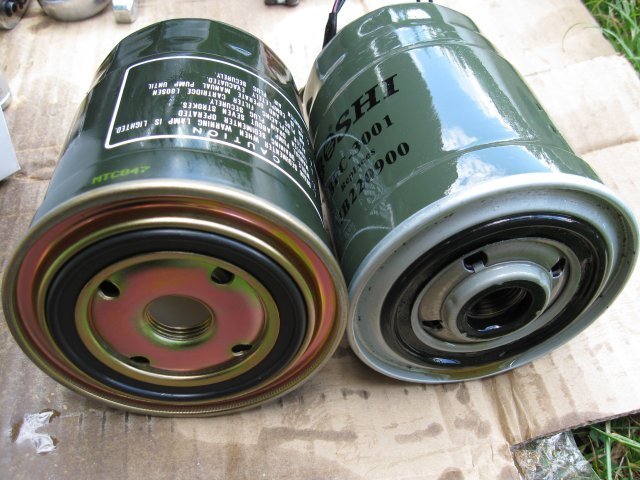 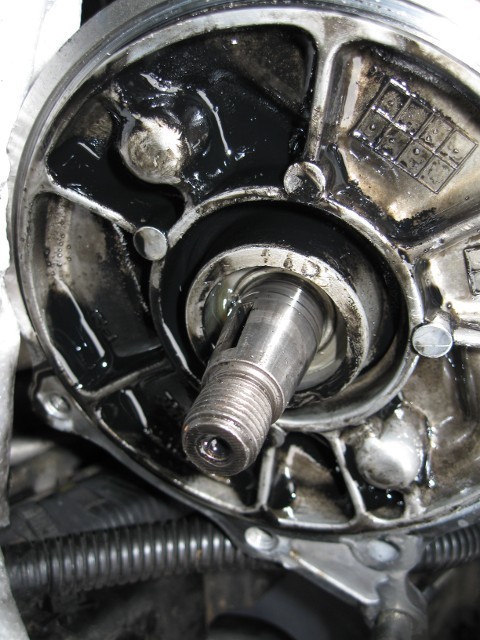 Symptoms include stalling 100m down the road after starting, oil in the fuel (black filters) and fuel in the oil (rising sump oil level due to oil dilution).

New seals are available on eBay for about £10-15. Replacement does require pump removal, but isn't such a hard job that it would pose a problem to an experienced home mechanic. See this Delica forum thread for guidance.

Note that the camshaft has a flat and notch on top, visible through the oil filler cap, to indicate #1 piston TDC (though the accuracy of this depends on chain stretch). The pump also has a notched tooth that must remain aligned with a "T" (turbo) mark on the pump case - as opposed to the "N" (normally aspirated) mark. The crank should always be turned clockwise (turning camshaft anticlockwise) to avoid over-tensioning the chain.

Pump internal fuel pressure (and therefore injection advance timing) is influenced by a "pulling electromagnet" (Zexel name for the green capped solenoid at the back of pump). It sits above the stop solenoid on the rear of the pump. 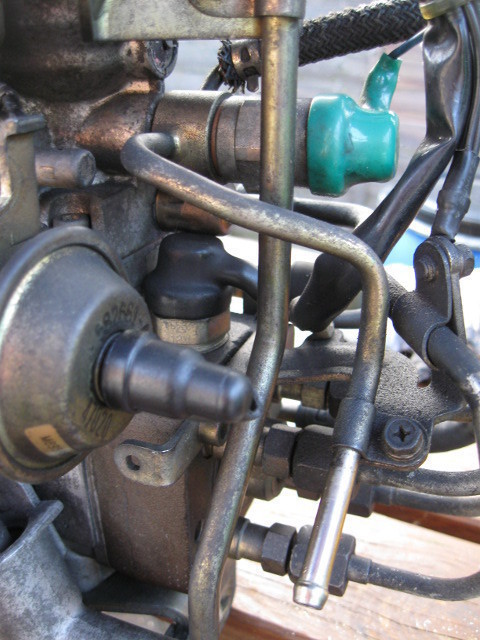 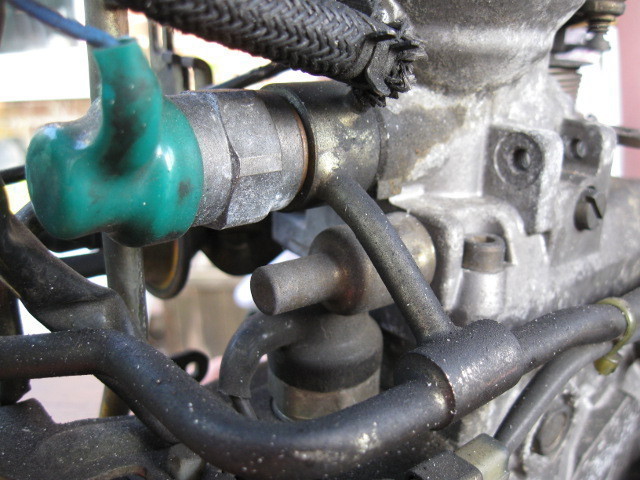 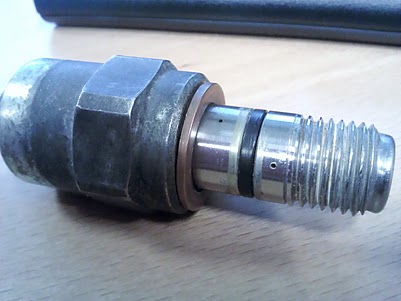 It is hollow up the middle and this is lined with a filter mesh. There are three outlet holes, one on the pump end of the valve (right in this photo), two on the solenoid end (left), separated by an o-ring. The o-ring is 12mm ID, seated in a 2mm slot. The barrel of the solenoid is 14mm.

The solenoid separates fuel pump overflow into two paths. This is not obvious unless you look closely at the fuel union on the back of the pump.

One path, always open, returns fuel from inside the pump to the tank (via the return pipe shared with the injector spill-off).

The other path, only open when 12V is NOT applied to the solenoid, loops the fuel from inside the pump back to the pump's inlet (lift side).

Applying 12V closes the ports on the loop side.

Its purpose in life is to advance injection timing from cold, and when up to temp return to normal. This advances the timing across the whole RPM range.

The internal mesh can block up with crud and affect the pump's timing (injection is too advanced). It is also possible that the o-ring may no longer seal.

When parked there is no power to this solenoid so all ports are open. Without the one-way valve built into the Delica's filter head, this would let air from the return line into the feed line, which would drain back to the tank. If you suspect you have air in the pipe to the pump when cold started, make sure the filter head/primer arrangement isn't allowing fuel to flow backwards through it (take it off and try blowing through it the wrong way).

You might think it would be impossible to start with nothing but air in the pickup pipe, but it will start and idle (badly) on just the fuel left in the pump and filter, until some more makes it's way up from the tank.

Cleaning is best done with a section of braided copper wire - the ends easily catch onto crud and pull it out. 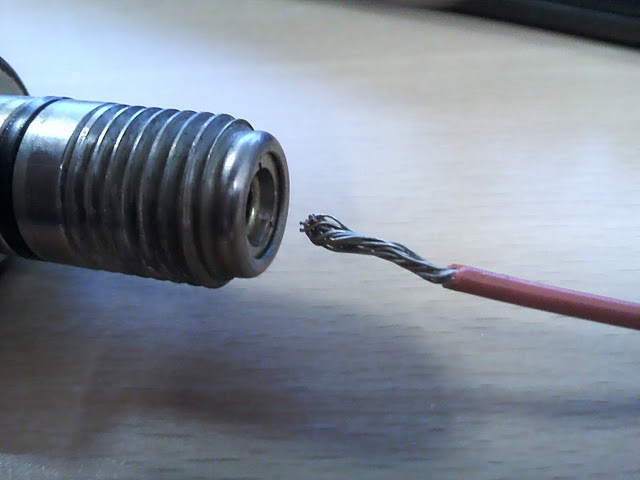 Check that the valve actuates when 12V is applied. It should go with a fair clonk noise.

Diesel Bob sells these for £75+VAT with £3 P&P. However, the part number he supplies is unknown. 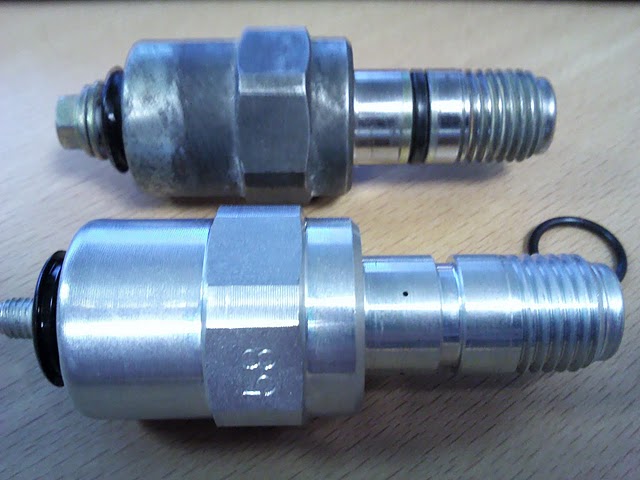 Note that it does not come supplied with an o-ring, which must be sourced separately.

However, there are notable differences. The original says "76" on the side and has two drilled ports on the loop side (three total). The new part above has "58" on the side and four drilled ports on the loop side (five total). This might suggest that the internal pump pressure will be reduced with resulting retarding of the injection timing, but in practise this seems to have no observable effect.

The pump also has cold start mechanism on the side. This gives extra throttle at idle by pulling on the throttle lever, and advances the injection timing at low engine RPM by rotating a shaft into the side of the pump. 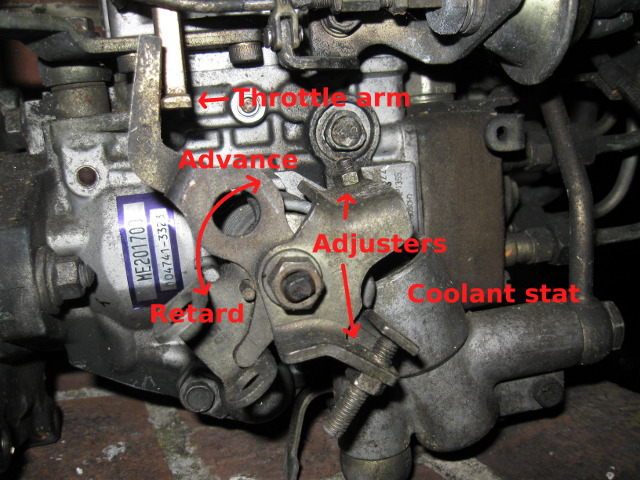