How to make a cheap water test kit,this wont have the accuracy of the well known version but is more portable than a manometer. The accuracy is reliant on the quailty of the gauges bought. 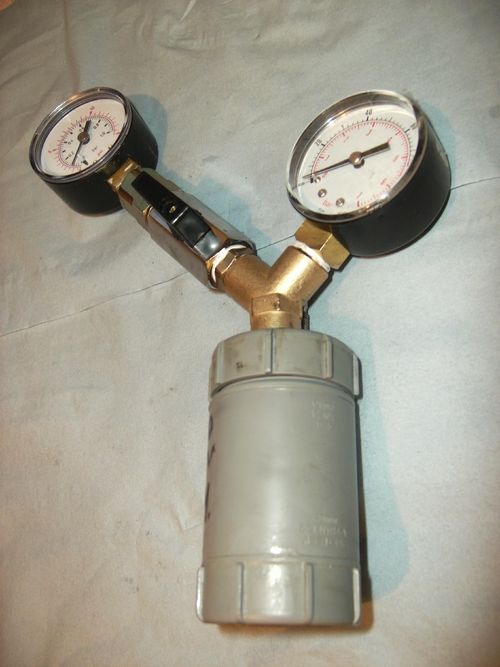 This kit will work with calcium hydride (CaH2) and calcium carbide (CaC2)as the reagent,the hydride gives a quicker result and produces more gas (hydrogen) but is hard to source whereas carbide is available from a well known internet auction site (£15/500g @4/2011 ) For a dry solvent you can use petrol or white spirits.

The idea is that any water in the test liquid will react with the calcium and produce a gas (hydrogen),the pressure created is registered on the gauges. The dry solvent dilutes the test liquid and allows any water present to get to the reagent quicker.

With my one shown above ive found that 35ml of test liquid and 10ml of dry solvent combined with 7gr of calcium carbide is an ideal amount. I grind 7 grammes of calcium and place in the small holder inside then put the two liquids into the vessel, screw the lid on and invert and shake (the marble helps the mixing action)there should be an immediate showing on the lower gauge, keep and eye on the gauge and if it looks like its going to go off the scale shut the valve to the lower gauge and read off the higher one. Take the reading at a set amount of time and try to keep the temp of the tests as constant as posible. The one shown will give a reading from 11 psi with dry oil upto 80 psi with a water content of 4000 ppm. The cycle valve is for releasing a fast rising pressure or when finished. This type of valve has a knurled nut which i leave undone so if the pressure starts to rise too high it can be released by touching a implement such as a screwdriver to it (DO NOT USE YOUR FINGER)

The maximum PPM in vegetable oil is <400

Biodiesel will hold 1500 ppm of water before going cloudy.

Obviously the more accurate you are with this the better the accuracy of the finished kit. I used new vegetable oil and distilled water to make up various PPM mixes and plotted the result on a graph, this is then used when test your liquid, make sure the vessel is cleaned well between tests.

Do not use on a liquid that is obviously wet, I have taken mine above 80psi and when it reaches its limit the gas escapes from the threaded cap BUT there is a danger it could explode at high pressures.

Hydrogen a highly explosive gas is made when using this kit.