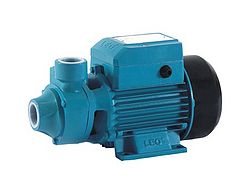 The Leo XKM60 is a periferal turbine pump and is probably the second most popular processor pump in the UK, second only to the TAM105.

It is sold as a clear water pump with a maximum temperature rating of 60°C, but it has been found by many home brewers to operate quite satisfactorily at temperatures up to 80°C and above, pumping oil and biodiesel.

It is not self priming, but once primed has a very respectable suction lift for a pump of its size and can be used for transferring and filtering vegetable oil, provided the oil has a low viscosity.

The Leo XKM60 has the following specifications and performance: