Direct cylinders are the best choice, followed by indirect - the only disadvantage of indirect is that the coil occupies some of the cylinder's volume.

The comparatively rare "primatic" (self priming) cylinders are unsuitable for use as biodiesel processors; a much larger volume is wasted by the primatic apperatus, and not all of the liquid can be drained out. A primatic cylinder can be identified by look into the side ports - if a wall of copper is visible just inside a port, then the cylinder is primatic. If the port forms a tube that bends away to one side, then the cylinder is indirect and you're looking into the end of the coil. Another quick check is to jiggle the cylinder - if there is a coil this can be felt wobbling around inside.

Any processor with an immersion element directly heating the liquid presents a possible risk of fire or explosion. Incidents reported with the use of copper cylinders include:

The last of these is easily avoided; before being used as a processor, the heating element should be removed to determine its length. Unless the cylinder is particularly tall, long elements are not suitable, as the tip of the element may protrude above the surface of the oil and methanol mix, igniting any methanol vapour present. For this reason, long elements should be replaced with the folded 11" type. 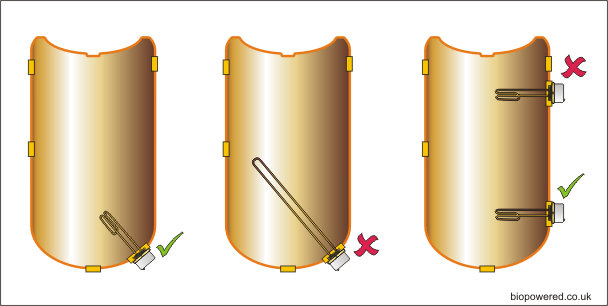 The other three risks all relate to lack of liquid in the vessel. These can be protected against by using either a pressure switch or float switch to control when the immersion element can be switched on. 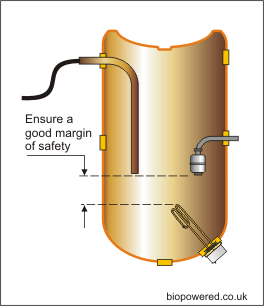 Most new cylinders are supplied with foam insulation. When the cylinder is turned up-side-down to use as a processor what becomes the top is un-insulated, as shown below. Because this is the area where the greatest heat loss will occur, it’s important to add additional insulation. 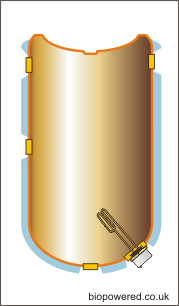 This can be done in several ways. Bubble wrap, or camping mats can be taped in place, but most adhesive tape is attacked by biodiesel and will probably require replacing in due course.

A more permanent method is to cast polyuathine expanding foam into a mould built on the processor. The mould is constructed from corrugated cardboard wrapped in polythene. A strip is wrapped around the circumference of the processor and tapped to it. A circular lid can then be made and taped on top. The mould should account for any pipe connections on the top and all the joints to be covered by the foam should obviously be tested first.

Once the mould is constructed three or four small holes can be made and the foam injected through them. Don't inject too much foam. If over filled the bubble size of the foam seem to grow too large and leads to brittle foam with large bubbles. Allow the foam to cure overnight and then remove the mould. Any voids can be filled simply by applying a little more foam and paring flat with a knife when cured. 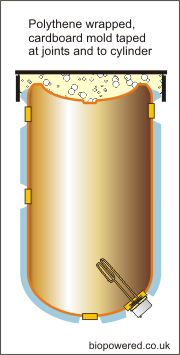 Copper as a catalyst to oxidisation

Unfortunately, copper acts as a catalyst to oxidisation of biodiesel - even at the level of a few parts per million in the fuel. Fortunately, this only really applies to long term storage, and as the average homebrewer is likely to use their fuel within a couple of months of production, this does not cause any problems. It is, however, advisable to avoid storing your fuel in the copper cylinder if possible.