Every year in the UK around 150,000 motorists fill a diesel car with petrol by mistake and the number is growing year on year. As biodiesel home brewers and veg users we know most diesel engines will run with a small percentage of petrol (RUG) mixed in with the diesel usually up to 5%, but higher percentages can cause expensive damage to many modern diesels. This mixture of fuels is called misfuel.

The remedy for most motorists is to call a breakdown service or limp to a nearby garage to have the tank drained and replenished with the correct fuel. For many garages, this misfuel is often difficult to dispose of, but it can be a cheap or free source of veg oil thinner or biodiesel winteriser.

Before using misfuel it's best to know the proportions of petrol and diesel in the mix. At the time of writing, two independent tests have been conducted by zebedee and Rotary Motion to ascertain the percentage of each based on the specific gravity (SG) of the mix. The SG of forecourt bought fuels varies quite a bit, petrol between 0.71–0.77 and diesel between 0.82 - 0.95 so the graph below, which is an average of the two tests, can only be considered as an indication of the mix ratio, not and absolute measurement. It is assumed that tests were carried out at between 17°C and 20°C. 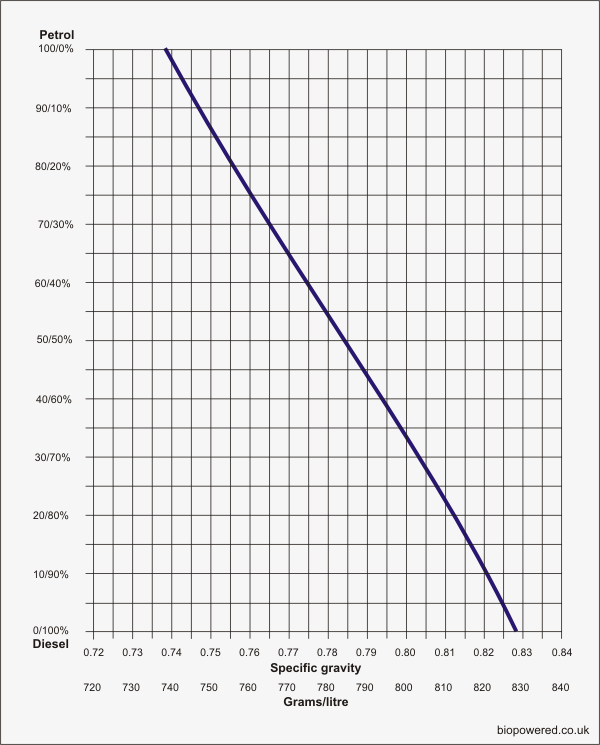 Alternatively the misfuel can be weighed. If weighing and accurate scales are to hand, it may be more accurate to weigh 1kg of pure water at between 17°C and 20°C and carefully marking the level on the container. Then refill with misfuel at the same temperature, to exactly the same level and note the weight.

To calculate the quantity of misfuel to add to a known volume of WVO or biodiesel, the following calculation, originally posted by zebedee, can be made.