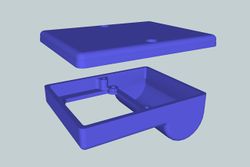 A file is included to print the sealing ring using a flexible filament such as Ninja-flex. Alternatively a seal can be cut from a suitable material circa 3-4mm thick with the dimensions ... OD 62mm ID 50mm.

Due to the profile of the threads, the item is best printed at 100% fill, hose tail up and with support. Careful cleaning of the support remnants will be required.

As with many other pumps the terminal box on this Lowara pump doesn't seem to be made to last. The replacement was designed with considerably thicker walls and sturdy reinforcement. Additionally, the capacitor housing was enlarged to make fitting after market capacitors easier.